Ollie Kenchington is back with another DaVinci Resolve course, but this time it’s geared toward advanced editing techniques. If you’ve already gone through the Definitive Guide to DaVinci Resolve, then this new course is a perfect next step.

The lessons are based on the official BlackMagic training book and curriculum, but Ollie draws from his decades of experience as an editor and an educator to provide you a wealth of tips and instruction that goes way beyond the official curriculum.

The curriculum was originally intended for Resolve 16, but this course was shot on Resolve 17 (during its Beta stage), so you'll get to see how everything is laid out and works in the newest version of DaVinci Resolve.

After you complete the course, you’ll be well prepared to take the official BlackMagic exam to become certified in DaVinci Resolve.

With over seven hours of in-depth instruction to mastering DaVinci Resolve, there’s something for everyone in this course, from advanced users to editors who are considering switching to Resolve.

After downloading the course materials, you can follow along with Ollie as he guides you through a rapid edit in the Cut Page, advanced techniques in the Edit Page, and finessing your project with motion graphics, audio sweetening, and final delivery. You’ll tackle a variety of projects from a documentary to a commercial promo and even a narrative dialogue scene. 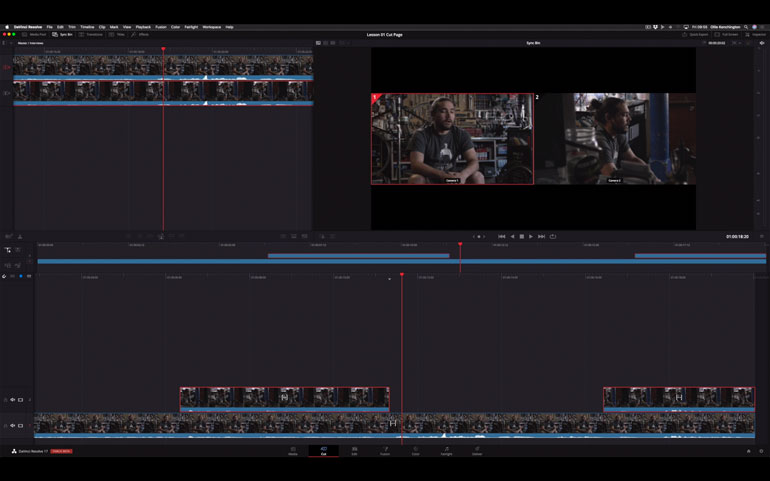 And don't forget, all the lessons feature subtitles, which can be viewed in over 100 languages. Read our guide to watching our courses with non-English subtitles.

Here’s a rundown of what’s covered in each lesson:

Editing in the Cut Page

To get the course started Ollie takes us through Resolve's Cut page, showing exactly how to cut fast turn-around videos with minimal effort, using a multi-camera interview project as an example.

Editing in the Edit Page

The Edit Page supports the approach to non-linear editing that has been battle-tested by editors around the world for decades. In this lesson you will learn those techniques so you can apply them to your own editing workflows.

While DaVinci Resolve is a superior editing, audio mixing, visual effects, and color grading system, it can also play a key role on set before a single edit is made. In this lesson, you’ll focus on some of the incredibly powerful yet lesser-known, and often overlooked, Resolve functions that will help during production as you organize and optimize high-resolution, camera-original media, and generally prepare everything for your edit.

Editing a dialogue scene is often done by establishing the location and cutting between shots as they would play out in real time. Commonly known as continuity editing, this technique is centered around cutting between two (or more) shots, alternating back-and-forth between each character as their dialogue and reactions warrant.

In this lesson, you’ll apply this continuity technique to a scripted scene. You’ll start with one of the most firmly established conventions in cinema—the shot/reverse-shot—and see how DaVinci Resolve editing, match framing, and trimming tools can speed up this classic editing style.

Being able to get the very best out of your interview subject takes a lot of practice and a good ear for the spoken word. When cutting interviews, it’s common to create the best-sounding interview and almost completely disregard the visuals until that first rough cut is done. This cut is called a radio edit because it is similar to editing an audio-only interview.

Once you have the interview audio cut properly, you can turn your attention to the video edits, often referred to as the paint because you are illustrating, or “painting,” your interview with appropriate pictures from your b-roll rushes. In this lesson, you’ll use advanced audio and video trimming and other workflow features in DaVinci Resolve to finish an engaging one-minute promotional piece for a vegan restaurant.

Multiple cameras running simultaneously are used for many types of productions including, music videos, and reality programming. The Cut page enables one way to edit multicamera productions while the Edit page uses a more traditional setup.

Both pages allow you to initially synchronize multiple clips and then easily manage and edit between camera angles without any further concern about sync issues. However, the Edit page provides a bit more flexibility when it comes to naming and ordering camera angles, as well as enabling switching and even color grading. In this lesson, you will explore the power of multicamera functionality in the Edit page, and learn how to solve some common challenges.

Multilayered promotional videos or promos, combine video, audio, motion graphics, and text into a seamless animated short video. While creativity and imagination make every promo unique, the ultimate goal is always about conveying the message.

You can apply the layering, graphic, and animation techniques you learn in this lesson to commercials in which you need quickly to persuade viewers to engage with a business. These techniques also come into play when creating educational content that needs to explain difficult or complicated concepts in an easy-to-understand way.

This lesson will introduce the compositing and animation features available to you in DaVinci Resolve's Edit page. These days, editors often need to build composites and apply some level of keyframe animation, either as previz (previsualization) for motion graphics or as the final content.

Fusion is an advanced compositing application built directly into the DaVinci Resolve interface. Editors can use Fusion to create custom titles and credit sequences, insert missing elements into a scene, and cover-up continuity issues.

As Fusion is located directly in DaVinci Resolve, switching between editing, grading, audio mixing, and compositing is a seamless process. It is no longer necessary to transcode or pre-render media. Instead, you click the page you need to immediately switch to the necessary toolset.

The exercises in this lesson are designed to familiarize you with the Fusion page interface and some of its fundamental operations such as merging nodes, creating rolling credits, tracking clips, and keying green/blue screen.

Building and Mixing the Soundtrack

Your project’s soundtrack is an essential part of the overall audience experience. Fortunately, while the Fairlight page in DaVinci Resolve is designed to create big Hollywood soundtracks, you’ll find it familiar enough for you to use as an editor.

In this lesson, you’ll explore techniques for audio editing, sound design, and final mixing, including “sweetening” your soundtrack as you apply professional equalization, dynamic controls, panning, and automation to your tracks.

The goal of mixing and mastering is to balance the levels coming from each track so they sound good as a whole. Fortunately, the Fairlight page includes everything you need to make sure the levels are right on target.

When you’re ready to export a project— whether at the end of a workflow, at an intermediate point, or when generating dailies—the render settings and final output are configured in the Deliver page of DaVinci Resolve. The aim of this lesson is to shed some light on how to add, format, and include subtitles and audio submixes for your final output.

You can watch this course, along with our entire library of filmmaking courses, by becoming an MZed Pro member. There’s over 250 hours of lessons, and our library is constantly growing.

For new editors, we think it makes a lot of sense to learn DaVinci Resolve before other video editing software. Why? Because the skills you learn are applicable to just about any NLE out there, such as Premiere or Final Cut Pro, but DaVinci Resolve is quickly growing in adoption among filmmaking professionals.

So if you want to watch all our Resolve courses, along with dozens of courses from cinematography to screenwriting and more, become an MZed Pro member today.

Lastly, one of the many benefits of being an MZed Pro member is you'll be automatically entered to win a prize every month during your subscription. Just our way of saying thanks!